In my mind the biggest issue with MTG (other than cost) is its mana system. Anyone who has played MTG can tell you about the many times they’ve lost games because they either drew too much, or not enough mana. This problem is so old and common it has a name known by both its players and developers as Mana Screw. While this problem can be managed to a certain extend by good deckbuilding and mulligan practices, there is nothing preventing it from rearing its ugly head in any given game of magic.

The question each new TCG must face: how to handle resources? Garfield’s follow ups removed resources from cards. Vampire the Eternal struggle used life points as its primary resource. The venerable NetRunner utilizes cash like “credits” acquired through base actions and occasionally through cards. Paying life is a fantastic system that leads to interesting cost-benefit analysis, but also feels bad. It works best as a sub resource, not the primary. I’m honestly surprised that money isn’t a more common resource though. It works fantastic at always allowing you to do *something* with your cards, while still providing a cost curve. While I haven’t played every TCG, the only other game I can think that uses this system is A Game of Thrones LCG. 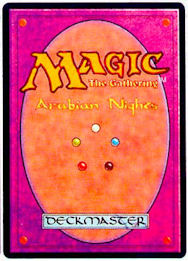 More often a new TCG wants to maintain a similar mana system*, but with a new twist. WoW: TCG implemented a solution that many other MTG knockoffs have attempted before: letting you play any card from hand facedown to count as mana. This is a very elegant solution that almost single-handedly solves the issue of mana screw. But it has a very large downside. Which cards to sacrifice for mana is very difficult tactical decision. Plus, it needs to be made on every turn of every game. For very experienced players this adds a lot of depth. But for new and more casual players it can quickly lead to decision fatigue. I wouldn’t be surprised if the decision fatigue brought about by this mechanic contributed to the WoW TCG’s lack of popularity.

*Another option is to take the Yu-Gi-Oh route and not have resource outside cards and life. This is overall a pretty fucking terrible system as cards like Raigeki and Book of the Moon have the same cost. Balancing this system requires awkward solutions like restricted lists, and very strange alternative resources

MTG’s mana system can be too random, occasionally taking decision making power away from the player completely. WoW: TCG’s is too deterministic, asking the player to make too many decisions. Hearthstone solution was to sidestep it, making mana acquisition automatic. At the beginning of each turn each player will gain 1 mana, until reaching a cap of 10. Mana in Hearthstone is truly free, not any carrying card or action cost. This means that every card you draw throughout the game can be played. While elegantly removing issues of wide-variance and decision fatigue, it brings along its own unique issue: consistency.

TCGs thrive on unpredictability and emergence. A large part of the fun is reacting to the new situations the game’s systems create. On the other hand, consistently playing powerful cards is the key to winning. Players will always try to build the most consistently powerful decks. A good TCG needs find that fun balance of variance and consistency.

With a steady mana curve and cards that will always see play, HS games run the risk of becoming linear. One of the ways HS lowers consistency is by lowering the number of cards. Max deck size is 30, with a max of 2 copies of an individual card. This means the most consistent decks will have at least 15 unique cards. Compare this with magics 60 card decks, and a 4-copy limit on non-basic cards. It’s reasonable for a mono-color deck to run 20 basic lands, then 4 copies of 10 different cards, for only 11 unique cards in a deck. This consistency in deck building is allowed by the variance of the land mana system. HS must have less consistent decks, because its mana is so consistent. This also has a nice side effect of making deck building very simple.

HS also fights against deck consistency through its Legendary rarities. These cards are often exceptionally powerful or complicated. To balance this out they are restricted to only a single copy per deck. If a deck includes even just 1 legendary card, it will require at least 17 unique cards. These cards carry enough power that players are willing to sacrifice consistency for that power. This concept is taken to an extreme with cards like Reno Jackson and Raza, cards so powerful that players are willing to play the least consistent decks possible to use them.

The last way HS fights against consistency is through pure RNG. Cards like Knife Juggler and Piloted Shredder have variance baked right into their card’s mechanics. These mechanics leverage HS position as a computer game. While Knife Juggler like mechanics can exist in a physical game, they are time consuming, cumbersome, and require dice (something not traditionally used in an MTG game). On the other hand, Piloted Shredder is a card that can only exist in a computer game. The two cards I selected as examples tend toward very high amounts of variance, the results of their RNG occasionally deciding the game on their own. In these cases, the game ended up leaning too heavily on variance, overcompensating for the consistency problem. Later RNG effects have narrower possibilities, and have been much better received.

2 thoughts on “Solving the Mana Problem”