I own quite a few Boss Fight Books, both physical and eBook. This one I got in an online bundle. Out of those various titles I was drawn to Soft and Cuddly because I had no idea what it was about. How could someone write an entire book (even a relatively short one) on such a small and obscure game? Mostly by writing about everything surrounding it’s creation and release.

END_OF_DOCUMENT_TOKEN_TO_BE_REPLACED

The Boss Fight Books series are in depth analysis of video games. This particular book is about one of the most overlooked games from my favorite video game series, Final Fantasy V. While originally released in Japan in 1992, we didn’t get it in the US until 1999, in the compilation Final Fantasy Anthology. For me and many others though, it was overshadowed by Final Fantasy VI, one of the most highly regarded games in the entire series. But, as Kohler demonstrates in this book, FFV is a much more interesting and important game that I originally thought. 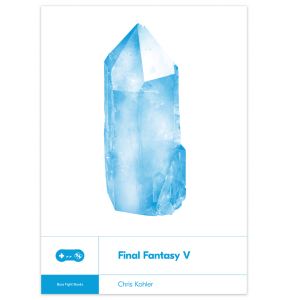 END_OF_DOCUMENT_TOKEN_TO_BE_REPLACED

That’s right, I read too!  Short and sweet thoughts on these two novels after the jump.