In 1987, Guns n Roses burst onto the music scene with their debut album Appetite for Destruction. The album, and its lead single “Sweet Child o Mine”, quickly reached the top of the charts. Part of their success can be attributed to their notorious lifestyles, at one point earning them the title “most dangerous band in the world”. GnR had a large impact on pop culture, especially video games.

To start us off, let’s look at in game appearances by the band. First up is lead singer Axl Rose in GTA: San Andreas. Here he takes on the role of DJ Tommy “The Nightmare” Smith. His radio stations is K-DST. This station plays classic rock, but weirdly, not any Guns N’ Roses songs.

Slash has appeared in two different guitar themed games. He graced the cover of Guitar Hero 3, where he was a playable character and boss. “Welcome to the Jungle” is also a featured track within the game. Later, Slash appeared on the cover of BandFuse: Rock Legends. This game utilized an actual guitar as a controller, and could help you learn to play for real. Despite Slash’s presence, this game features no Guns N’ Roses songs.

Finally, I want to mention Burnout Paradise. This racing game takes place in the fictional Paradise City*, named after the Guns N’ Roses song. The song itself is prominently featured in the game’s track list and title screen.

*While playing this game back in college, my friend told me he always thought the song was called “Prairie Dog City”. Now that’s a video game I’d like to play!

Now onto references placed by a game’s developers. Final Fight came out in Japanese arcades in 1989. In this beat-em-up you rampage across the city, pummeling random thugs. Two of these thugs are named Axl and Slash. In Final Fight they were palette swaps of one another, and looked nothing like their namesakes. Axl returned in Street Fighter V, with a new look that looks more like the singer. While Slash wasn’t in SFV, he did get new artwork that bears a closer resemblance to the real Slash.

The Guilty Gear Fighting series features many references to rock n’ roll, so of course it features many GnR references. Axl Low is a British time traveler who has appeared in every entry in the series. He is a very obvious reference to Axl Rose through his name and appearance. But the rest of his personality, move-set, and storyline are amalgamations of various other rock references. 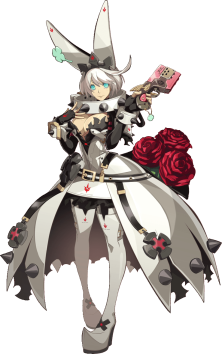 From the most recent Guilty Gear series, Xrd, comes Elphet. She is dressed in a bridal gown with a large bouquet of roses across her back. In battle she wields pistols, rifles, and flowers. So basically she is a very literal interpretation of Guns and Roses.

The last GnR reference in Guilty Gears is also our first reference to a band member other than Axl and Slash. Dizzy, a woman who is half-gear, is named after GnR’s keyboardist Dizzy Reed. Each of these GnR referencing characters also share the same birthdate, December 25.

This last category is when the English language version of the game features a reference that wasn’t present in the Japanese. In Chrono Trigger, Magus has three henchmen named Ozzie, Flea, and Slash. All three are named after famous rockers in English, but in Japan they were named Binegar(vinegar), Mayonne(mayonnaise), and Soiso(soy sauce). This change seems to be made due to cultural differences. Slash is also a sword user, so his new name is very appropriate.

The final translation reference is also the biggest and, in my opinion, weirdest. While researching I found that MegaMan X5 had a rose themed boss named Axle the Red. There was also a bear themed boss with large claws named Grizzly Slash. But it didn’t stop there, I noticed another boss named Dark Dizzy. In fact, every boss in this game has been named after someone who was in Guns N’ Roses. This make it the only other game I’ve found to reference bandmates that aren’t Slash and Axl. It turns out the voice actress X, put forth the idea to change the bosses names to GnR references because her husband likes the band.

It turns out MMx5 wasn’t the only game in the MegaManX series to have a character named Axl. This guy even has red hair and wields a pistol, he must be a reference to GnR right? Well turns out he wasn’t. Kingdom Hearts features an angry young man with long red hair named Axel, but, probably not a reference. The main character of Streets of Rage is also named Axel, but has little else in common with the singer. Here is a list of characters in games named Slash. While some were mentioned above, many of these are clearly not references to the guitarist. 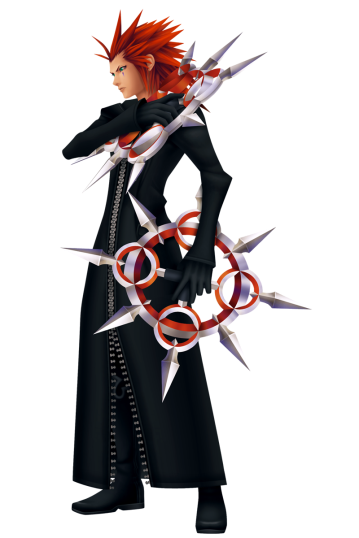 As the last paragraph shows, Axl and Slash are very cool and common names for video game characters. Notice that when the band appears directly, its something related to music, but when a game only references them, the characters will be fighters. I believe this goes back to them being “the most dangerous band in the world.” GnR had a very tough guy image, mostly from the violent antics of Axl. During one of his concerts he dived off the stage to attack a fan. Even the name of the band has Guns in it. Despite his more violent name, Slash is actually much more laid back, contrasting with Axl, making the duo much more memorable.

Basically,  they were a popular band, with cool names, and an association with violence. These factors all add up to easy inclusion in violent video games.