Into the Breach puts you in charge of a time traveling squadron of mech pilots. Your mission: save the four remaining human settlements from the Vek, an invading race of subterranean giant insects. The gameplay is a combination of tactical combat with a roguelike structure. With an appealing premise and engaging gameplay, Into the Breach has managed to grab hold of my attention in a way that no video game has for me in a long time. 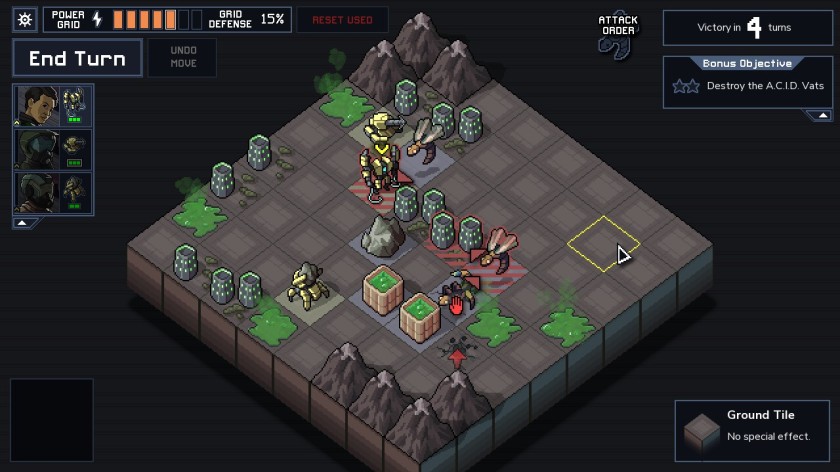 What’s most notable about my love for Into the Breach (ItB) is my general dislike of turn-based tactics games. Back when I was a kid I loved Final Fantasy Tactics and Tactics Advanced. But each tactics game I’ve tried since: Disgaea, X-com, Shadowrun: Dragonfall, etc., I’ve quickly bounced off. After playing ItB for awhile, I realize that what it does, that those games don’t, is reward good tactical decision making. In those other games, good decisions can be negated by die-rolls and/or poor stats. ItB removes nearly every random element present in other tactics games, and de-emphasizes statistics, heavily emphasizing and rewarding micro-level tactical decisions.

Like other tactics games, ItB takes place on a grid, upon which your units and enemies maneuver around, launching attack at one another. The board of ItB has many additional features: water, mountains, acid pits, and most importantly, buildings. The Vek generally prefer targeting buildings over your units. Each time a building is damaged you lose a point of “Power Grid”. If this ever hits 0, you lose the game. Therefore, your primary goal is to defense of the buildings. Even if all your mechs are blown up, if you have Power Grid on the final turn, you win the mission. Besides just being an interesting twist on tactics game goals, this system also helps emphasize the game’s theme of defending the people contained within the buildings.

ItB also utilizes a unique turn structure. At the beginning of a turn, all enemies make their movements, then telegraph their attacks. Before their attacks are launched, you take your entire turn, which consists of movement and an attack for each mech. The enemy’s turns are essentially split in two, with your turn sandwiched in between. During your turn you have perfect information: attacks targets, damage, HP totals, etc. Each of your actions effects are totally transparent as well. The game even includes a little preview before execution of your attacks. The only random element is your Grid Defense percentage. When an enemy strikes a building, there is a slim chance it may deal no damage. The number is low enough that you can never count on it, but catching a lucky break feels fantastic.

With all this info, it should be easy to foil your enemy’s plans, right? Well the primary challenge is that you are often outnumbered and outgunned. Most of your attacks will not outright kill an enemy, usually dealing only 1 damage to their 2+ HP pool. Your biggest advantage is that your attacks do more than just deal damage. Some examples include setting targets on fire, dropping smoke bombs, freezing, and more. But the most common, and most useful, is knockback. While your attacks alone may not deal enough damage to kill a Vek, you could knock them into a mountain for extra damage, into the water for an instant kill, or even into the path of another enemy’s attack. One of the most satisfying moments in ItB is maneuvering your enemies into a chain of friendly fire deaths.

With nearly no RNG and heavily position based combat, ItB feels a lot like a chess puzzle. You’re presented with a board state, and told to find a solution. While a good chess puzzle will have a definite solution, the puzzles presented to you in ItB may not have an optimal solution. This may be frustrating, but, in other ways it can be a relief. A true puzzle game will have an optimal solution each time, and not finding it can be infuriating. But because ItB isn’t a true puzzle game, there may NOT be an optimal solution, so it’s OK that you only get part of the way there.

ItB places a lot of emphasis micro level decisions made during combat, but these decisions are influenced by your overarching strategy. Strategies are formed from your squad of mechs. You start with only a single pre-made squad, but through achievements you can unlock up to 9 more squads of 3 unique mechs each. Each squad has a different style of combat. For example, the starting squad, Rift Walkers, has a good mix of damage and knockback. This makes them great for beginners learning the ropes of the game, but they do not excel in either area. Later you can unlock a squad called Steel Judoka, who emphasize positioning over damage. Other squads have their own emphasis, including fire, freezing, lasers, and more.

One of my favorite parts of ItB is unlocking a new squad and learning their playstyle. I was surprised at how effective the freezing squad, Frozen Titans, could be. The self-freeze effect struck me as weak. It renders the unit unusable next turn, but it also acts as a shield. This lead to some interesting uses where my unit would freeze itself in the path of an attack while freezing another enemy, effectively negating 2 enemy attacks, and still being usable next round. I also found the self-damaging Hazardous Mechs crew to be difficult to utilize effectively, but very rewarding when pulled off. My favorites are still the Rift Walkers and Steel Judoka for their utilization of knockback and positioning to disrupt enemy formations. These two squads are the best at setting up the above mentioned friendly fire scenarios.

There is a lot more to ItB than what I’ve covered here. There’s the entire rogue-like structure of multiple runs, and procedurally generated missions, but those are a bit outside the scope of this article. What I wanted to emphasize is just how darn good the combat in this game is. The multitude of factors that goes into each encounter, mechs, environments, enemies, and bonus objectives all mesh together to create a unique battle puzzle each mission. Because RNG is nearly eliminated from your actions, you feel the full weight of each decision you make. Failure and success fall totally upon you, which can lead to some crushing defeats. But when you succeed you feel like a total military genius.

One thought on “The Puzzling Tactics of ‘Into the Breach’”