The last few card games I looked at were big complicated games featuring lots and lots of cards. I love games like these, but some people may take one look at the stacks of card board and run the other way.   I thought I’d take a break from 100+ card count games and look at something much simple, the 16 card game, Love Letter. 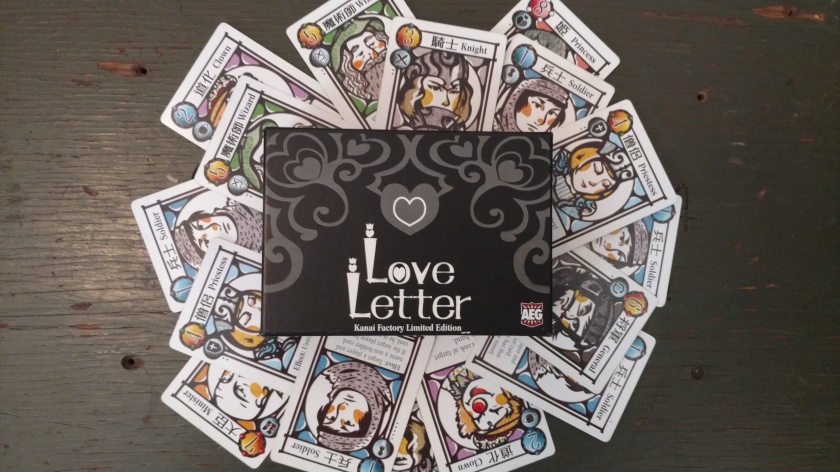 Players take on the role of suitors to the princess (or prince).  To win her heart, you must  deliver to her a declaration of love.  You will collude with members of the royal court, like guards, ministers, and even the princess herself.  Try to get your letter to the highest ranked member of the court, or remove all other suitors from the castle to win.

The game itself consists of 16 cards, ranked 1 (Soldier) to 8 (Princess).  Each player will be dealt 1 card at the beginning of the game.  During other players turns you will only have 1 card, most of the interaction in this game comes down to guessing what that 1 card is.  On your turn, you draw a card, then play 1 of your 2 cards, and choose another player to target (most of the time).

For example, the Soldier (1) card has you choose another player, then state a non-Soldier card.  If your opponent holds the named card, they must reveal it and are knocked out of the round.  The Soldier card is the most common one in the deck, with 5 copies.

Another way to knock players out is through the Knight (3).  Play the knight, then you and another player will compare held cards. The player with the lower value will be knocked out and reveal their card.  From this interaction, other players will know that the winner’s card was higher than the loser’s revealed card.

Other card effects include looking at an opponent’s card (Clown 2), protecting you from attack (Priestess 4), or forcing a player to discard and redraw a card (Wizard 5). Cards with values of 2-5 have only 2 copies in the deck.

Card with values 6+ have only single copies.  These cards are: The General (6), who swaps cards with another player, the Minister (7), who knocks you out if the total value of your hand is 12 or more, and finally the Princess (8), who will knock you out if she is ever discarded from your hand.

If on a player’s turn, no more cards can be drawn (1 card is set aside and will never be drawn), the round ends.  Players who haven’t been knocked out will reveal their held card, whoever has the highest card wins the round.  You continuing playing rounds until a player reaches a certain number of wins.  Personally, I like to play until one person has 2 or 3 wins, any more and the game tends to drag.

During the early stages of a round, your actions will be largely random.  In a four-player game, the first turn player will only know 2 out of 16 cards.  But after one round of turns, that first player will have seen 6 more cards.  Knocking another player out of the game feels good because it’s very unlikely at that point, essentially hitting the Love Letter jackpot.  Guessing correctly towards the later stages feels good too, as you will have used information to narrow down the possibilities.

Love Letter isn’t just about guessing other’s cards.  Each action is targeted, so collusion and negotiations become possible.  Most of the time this will result in a bash the leader mentality, a natural catch-up mechanism in these types of games.

One interesting negotiation tactic involves the Clown card. Let’s pretend I’m playing against Billy, Mandy, and Bob.  Billy already has 2 wins and takes his turn right before me.  I play the Clown on him, showing me he is holding the General.  He will get to take his turn before me, allowing him the opportunity to play the General before my turn.  Instead of hoping he doesn’t play it, I decide to tell Mandy and Bob that Billy is holding the General.  On Mandy’s turn she plays the guard on Billy and knocks him out of the round.

This combination of deduction and targeted interactions makes for some compelling gameplay, at least for a while.  After a few plays it becomes easy to figure out what the best action to take in a particular situation.  Unless the people you are playing with tend to hold to rivalries, games will become bash the leader until everyone has 2 wins. Then someone earns the final win through sheer luck.

I don’t think this is necessarily a bad thing.  Love Letter is cheap, small, and simple, but still offers a variety of decision making for only 16 cards.  The game makes great filler, adjust the number of round won needed for victory to fill in the necessary time.

Love Letter makes a great intro game.  It has a cute theme, simple rules, and short play time. It’s also packed with lots of interactivity between players that encourages socialization.  For people who haven’t played card games with anything other than a standard 52 card deck, Love Letter helps them ease into the new world of designer games.  This is my go to game for newbies, and have converted people into gamers through it.

Love Letter has remained one of my favorite card games in my collection for a while now.  Its short and simple gameplay works as a filler and introduction game, making it a great gift.  I think everyone should try it out, its a great study of how simple games can be compelling.