When I found out my all time favorite video game, Bloodborne, was getting a card game I was skeptical.  While I love card games and Bloodborne, I wasn’t sure if the two would mix well.  After finding out the designer would be  Eric M. Lang, I became less worried and more intrigued.  I still didn’t believe it would be a great translation, but I felt he would at least put an interesting spin on the idea, and probably make a good game as well.

Bloodborne (BBV) is a Victorian horror themed mostly single player action RPG. You run around killing monsters and collecting their blood echoes. Blood echoes can be turned in for character upgrades, but are potentially lost on death. The primary mechanics are timing of attacks and dodges, spatial awareness, and observation of enemy patterns. If you aren’t familiar with the video game, check out this video for more info on how it plays.

Bloodborne: The Card Game (BBC) is a Victorian horror themed multiplayer co-operative/competitive card game. You will work with your allies to try and obtain blood echoes. The player with the most Blood echoes at the end wins the game. Blood echoes are lost if a player dies. The primary mechanics are simultaneous action selection, card drafting, and press-your-luck. If you aren’t familiar with the card game, check out this video for more info on how it plays. 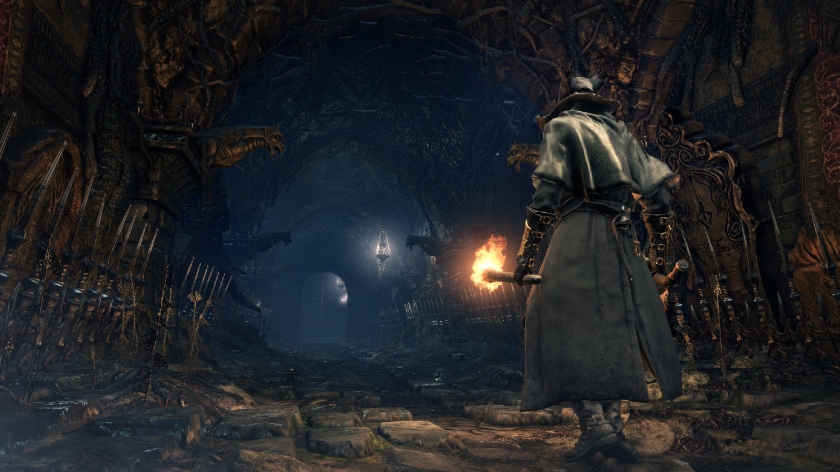 BBC utilizes an often-overlooked aspect of BBV for its setting, the chalice dungeons. In the BBV chalice dungeons, optional side dungeons, some pre-made and others are procedurally generated. These can be played in multiplayer co-op and PVP as well. Within the VG chalice dungeons are not well explained or emphasized. Players often must rely on outside guides to figure out how to access them (I know I did).  In BBC the story is that you and the other players have entered the chalice dungeon to acquire blood echoes. It feels weird for the card game to highlight something many players of the video game may have missed. But it does make sense as many chalice dungeons are random, and the deck of enemy cards is random as well.

BBV is largely a single player game, but co-op and PVP multiplayer are both possible and optional to play the game. I like to play BBV as a single player experience, but will occasionally summon co-op helpers for especially tough bosses. Unlike other games in the souls/borne series, BBV de-emphasized PVP aspects. While in Dark Souls 1,2, & 3 I was at least on a few occasions the victim of an invasion attempt, it never happened to me in BBV.

BBC focuses on competitive and co-operative gameplay simultaneously with other players.   The goal of the game is to have the most blood echoes after defeating the final boss.  Players work together to fight monsters, but each player only gains blood echoes after dealing damage to an enemy.  Cards are resolved in a rotating player order.  If its your turn to go first this round, its a good idea to hit the enemy hard to gain as many points as you can.  If you go last, you may not get to score any points for that round.  Players cannot directly attack each other. Some cards may allow players to indirectly affect one another.

While engaged in BBV combat your actions and attention are directed towards the enemy you are fighting. Timing attacks and dodges against your foes is the most important aspect. While playing BBC, your attacks are always directed at the enemy card, but your focus will be on the actions of other “allied” players. Paying attention to the current turn order, amount of HP on the enemy, and predicting your opponent’s plays are the keys to victory. This change in focus results in a bit of disconnect from the original work. What it accomplishes instead is an increased amount of interaction with other players at the table, important for a competitive card game.

Character customization and progression is vital in BBC.   Blood echoes are victory points in the CG, so spending them wouldn’t make any sense. Therefore, upgrades have become free. Every time you return to Hunter’s dream you get a new card, whether you went with a card or through death. I feel that choosing the right cards during upgrade phases is key to victory in the CG.

In the VG character progression is still very important. It allows you to upgrade your character to hit harder, take less damage and do more actions. Upgrades allow you to craft your character towards your playstyle, and make their abilities more powerful. But in the VG, they are not necessary to win. A sufficiently skilled player can take a beginner character, and beat the entire game without any upgrades. This shows that it’s the player’s skill, more so than the character’s power, that determines success. 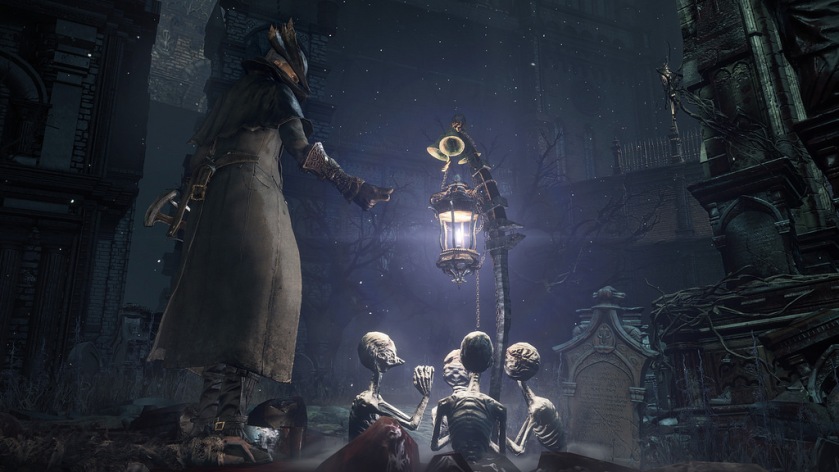 Monster’s attacks in BBC are determined by a die roll. These rolls could result in 0 damage, or could explode into cumulative re-rolls. Every monster could potentially deal an unlimited amount of damage. Before selecting your cards, you must assess how much damage the monster could deal to you, and decide if you want to retreat. This results in an important mechanic within BBC, pressing your luck.

This mechanic does not technically exist within the VG. Each enemy has certain attack patterns, and these attacks can be totally avoided with careful play. Luck has nothing to do with it. Unless it’s your first time playing. When you encounter a new enemy or area, you will be unfamiliar with how they behave. Experienced players may know to approach new areas slowly and play defensively. Newer players, used to playing more fast paced games that encourage you to play quickly will charge blindly into these new challenges. Maybe they will get some lucky hits and dodges then succeed, maybe they won’t. They don’t have a solid grasp on the mechanics, and these encounters may feel like they come down to luck.

The first time I ever played Dark Souls, the question in my head was always how far should I try to go? I could return to the bonfire to bank my souls, but then I’ll have to back track through this area again. Alternatively, I could try and press on towards the next bonfire, but I risk losing all my souls if I die. I was not confident enough in my abilities with the combat mechanics, nor did I have knowledge of where the next bonfire was. The game essentially felt like a press your luck game.

I believe the main failing of capturing the feel of the video game lies in the visuals. Cards are just plain boring to look at. They make me feel like I am reading an entry on the Bloodborne wiki. BBC’s look seems to be based on BBV’s user interface, instead of its gameplay.  A lot of BBV’s mood and excitement gets lost when the primary thing your looking at are static shots of inventory items. I feel that if the card art was replaced with more dynamic images of hunter’s swinging weapons, the card game would feel more like the original video game.

My overall feelings on the Bloodborne card game is that it’s a good game, but maybe not a great adaptation.  Not for lack of trying,  the card game interpreted many of the video games mechanics in interesting and surprising ways.  I played the card game with some of my board game only friends, who had never even heard of the video game.  They really liked it.  Its a short game, with lots of meaningful decisions, and a healthy amount of interaction.  That’s a rare thing, maybe if it was called something else I wouldn’t have this nagging sense of disappointment.

One thought on “Adaptation Comparison: Bloodborne”