Ryuutama is an RPG I picked up at Origins and have had the opportunity to play recently. Its a Japanese RPG that has been described online as “Miyazaki’s Oregon trail”, which I feel is a very apt description. With this article I wanted to take a look at how Ryuutama’s book and mechanics help to encourage and emphasize this style of play.

Ryuutama falls into a Japanese style of RPG called Honobono, or “heartwarming” style. These kinds of games are meant to be more laid back and “feel-good”. This places them into an interesting contrast with the usual RPGs, which tend to emphasize high intensity action and drama. Most of this tone is expressed through artwork, writing, and pre-made adventures. But the most noticeable and distinct change from D&D style RPGs is through its classes. Merchant, Artisan, Farmer and Minstrel are a few character classes within Ryuutama, things that would normally be reserved for NPCs in other games. Characters are defined more by their trades and pursuits than their combat abilities. 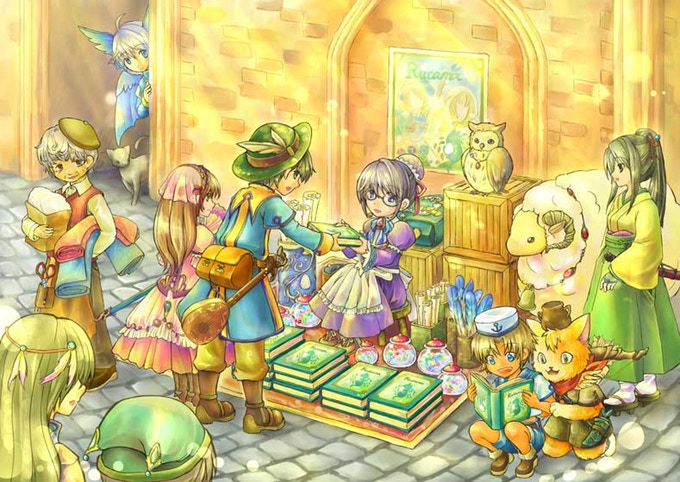 Ryuutama player characters also choose a type: combat, tech, or magic. These roughly equate to fighter, rogue, and wizard. Combat and tech consist of simple stat bonuses. Magic receives an entire chapter dedicated to its use. Some spells are used in combat to deal damage, heal, buff or debuff. But the majority of them are more utility for traveling or even just pure role-play. One example is the spring seasonal spell, “Emina Nonno”, which allows the caster to cover an area in flowers. This spell has no mechanical effect, but is utilized in one of the game’s examples of play to calm a crying child.

The heartwarming tone of the game mostly comes through in artwork and fiction, its rules place traveling at the forefront. The Journey rules, complete with its own separate reminder sheet on the website, are the centerpiece of the games mechanics. These are a series of rolls the party makes which determines their status, ability to traverse the terrain, confirm their direction, and status of their camp each night. Difficulty for these rolls is determined by the terrain being traveled on and current weather conditions. Each character must consume rations and water each night, which meticulously tracked by the party’s quartermaster, along with any other group inventory items. Failure during the travel checks can result in halving of HP, additional days of travel, or lack of recovery at night.

In order to keep the game from just becoming a series of travel checks, players are encouraged to be descriptive and interpret their rolls. For example if a character makes a poor travel check and loses HP, it could be because they got stuck in the mud during a storm and wore themselves out. The GM is also encouraged to make something happen during the journey, which could be meeting a fellow traveler or a random event. Most of the pre-made adventures feature something happening on the traveling days as well.

One of my favorite aspects of the game are its town creation rules. At the end of each session (or in the middle or beginning if you feel so inclined) the group will work together to create a new town. The book has a list of different features for a town and each player will go around the table and add in their own details. What I love about this is it allows the players to give an idea of where they want to go, and creates a guideline for the GM to plan the next adventure. There is a similar sheet for detailing the setting of your world, which you are encouraged to use after a few sessions.

What originally drew this game to me was its artwork. Characters and creatures are drawn in a kind of sketchy but detailed anime style that reminded me of various JRPG video games I played as a kid. I also love the colorful style and layout of the book as well. Each chapter featuring a different color scheme that is associated with the seasons (a major theme of the book). At the store the guy working there told me about how the game has a more laid back tone, which was appealing to me as I have had trouble getting into D&D and other more usual fantasy style RPGs. After reading the book and playing it a couple of times my favorite aspect has become the traveling rules, emphasizing an aspect of adventuring that other games I’ve played kinda gloss over a bit. Rolling for journeys and describing what happens while moving from one place to another has been a lot of fun, and I like that the town creation rules mean we have someplace interesting to go that I know they want to see.

I will say that the combat does take a bit of a hit. While most rules pertain to traveling, many aspects of character creation, spells and items to relate to combat. The combat gets abstracted down into a front line and back line for players and enemies, along with some random objects in the area of combat. Players describe how they use the items to gain a small advantage in combat (“I use the knocked over cart to gain cover, then fire an arrow!”). This adds a fun role-playing aspect, but doesn’t’ cover up the fact that combat mostly consists of rolling to hit, rolling damage, and passing. (To be fair, I have this same complaint with D&D, so RPG combat may just be something my group and/or I need to work on).

Overall I really enjoy this game, and plan on running it more in the future. It has a very different tone from the usual fantasy RPG, and I like the emphasis on traveling rules. This game would also be great for new players and GMs as it has a very good introduction section. I also like having more set rules and abilities for the GM to use*. My only concern is that the games rules do not have a lot of depth, so I am not how much staying power it has. My recommendation: Buy it for the art, stay for the heartwarming journey.

*So I wasn’t really sure how to fit this into the main review, but Ryuutama has a built in GMPC system called Ryuujin. Ryuujin are dragons that collect stories from travelers to feed to even larger dragons. They have character descriptions, abilities, and they can even level up! I haven’t really mentioned it because it mostly struck me as an odd inclusion, so I’ve been unintentionally ignoring it. Because I am making an effort to play this game as intended, in future sessions I want to drop hints of his presence, but without stealing any focus from the PCs or other aspects of the session.